I did not go near the studio this past weekend.  I had to work part of Friday, and Saturday Shannon and I had Plans.  Yes, Plans with a Capital P.  The times they are changing in Utah!

The western states, with a few notable exceptions, have never been much for public transportation other than maybe woefully slow bus systems, and Utah was no exception.  The Olympics in 2002 helped start the change- they did rebuild a lot of I-15 through Salt Lake, but they also started Trax, the electric train that ran from downtown Salt Lake to the southernmost suburb in the Salt Lake valley, Sandy.  I remember all the nay-sayers and their belief that we were throwing tax money down a rat hole. Trax now has a spur that runs up to the University of Utah, one that goes into West Valley City, and another into the southwest suburbs.  In April, a spur out to the airport will open.  It has made Salt Lake an easier place to move around without a car.

Then five years ago, a commuter rail line named FrontRunner opened between Ogden, the large city about an hour north of Salt Lake.  It made a commute between the two metro areas much easier than driving I-15.  When I heard they were planning to extend FrontRunner south, I was ecstatic.  I have very vivid memories of traveling all over Europe by rail when I was younger.  It was a lesson to me- it was possible to live somewhere without a car, something that was pretty much impossible in Southern California where I grew up.

I have been watching the construction for the past three years, and all that anticipation came to fruition this weekend.  FrontRunner to Provo officially opened on December 10, two years ahead of schedule.  And to get people to try it out, they ran trains to Salt Lake from 10 am to 10 pm on Saturday, December 8, free of charge.  Shannon and I were there by 10:30 am!!

We had to wait about 45 minutes to get onto a train- the line was long, and they only allowed about 100 people on each train in Provo, to allow for passengers boarding in the three stops north of Provo.  This is what the line looked like from inside the train.  Yes, it was a cold and snowy day!! 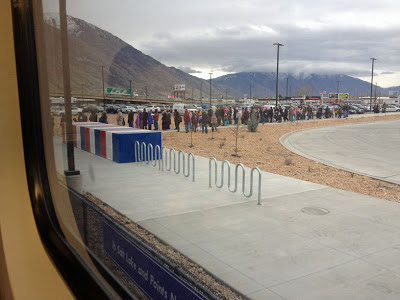 The inside of the trains is very nicely appointed, with free wifi and some seats with tables where you can set a laptop.  They are quiet and smooth.  I got this picture of the winter scenery, somewhere in north Utah county. 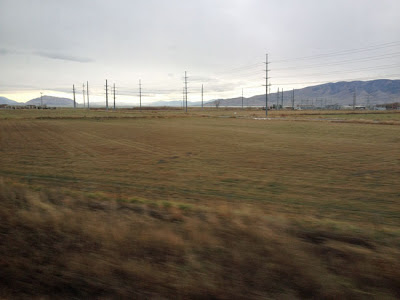 But riding the rails was not the only reason we waited in the cold to get the train.  One of the things I have most missed about California is Trader Joe's- a unique "grocery" that is a foodie's idea of heaven.  I never thought we would get one in Utah, because of our insane liquor laws.  Every Trader Joe's I've ever been in has a large liquor and wine selection, so I just didn't think they'd open a store without it.  Well, apparently they do- because our Trader Joe's opened in Salt Lake on November 30.  To say I was happy about this is an understatement of vast proportions!!

Shannon and I got to Salt Lake about 12:30, with both of us hungry.  We had lunch at Jason's Deli at the Gateway, a large shopping center (also developed for the Olympics) close to the train station.  Then we hopped on Trax to downtown, changed trains to go the U, and hopped off right by Trader Joe's.  Best of all, the Trax ride is all in the downtown free ride zone!! 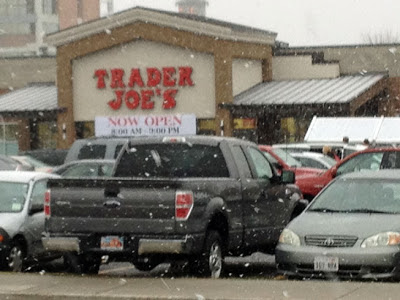 Yes, the parking lot was packed- one more reason to go here on the train!  And yes, it was snowing.  Who cares??

The store was packed, even a week after opening.  Everyone was in good humor, patient, and talking about how happy we are to have this piece of foodie bliss in our midst. 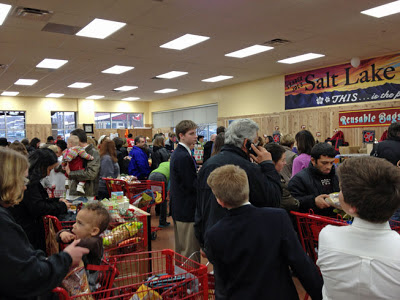 I walked out with dark chocolate sea salt caramels, dried Montmorency cherries, sweet and spicy pecans, candied pecans, Jojo's (TJ's version of Oreos, only mint), cookie butter, peanut butter, sparkling Chardonnay grape juice, and a vial of saffron at a ridiculously low price .  Shannon got a panetone in addition to a lot of the same stuff I did.  She was happy to find grade B maple syrup- again, at a ridiculously low price.  I'll be getting some of that when I return.

I'm going to have to figure out how I can get some of their frozen food items home on the train- wondering how I can turn a suitcase into a rolling freezer container without rendering it otherwise useless.  All in all, it was a totally satisfying day- with free transportation to boot! 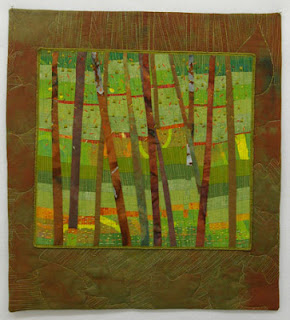 I finished the quilting on the background matte for Walk in the Woods 2 this weekend, and got the quilt sew to the matte.  All I have left to do is the label and sleeve- and, since I am planning to enter this in a show in Salt Lake in January, I won't be slow about those!

The quilting on the matte that bothered me when I started grew on me as I did it.  I may do it a little differently for the next in the series, but I'm happy with this one.  And if you are wondering, the matte is intentionally longer on the bottom.  I quilted a combination of leaf outlines and straight lines on the matte. 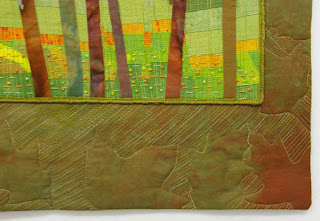 Last weekend we went to a couple of craft fairs.  Most of it was stuff that held no interest for me, but one vendor grabbed my attention immediately.  She had an entire booth of hand-sewn small quilts and pillows.  After a lot of deliberation, I chose this one- I couldn't resist that shot of chartreuse! 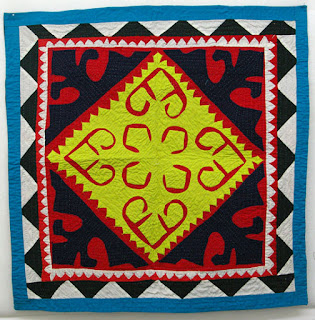 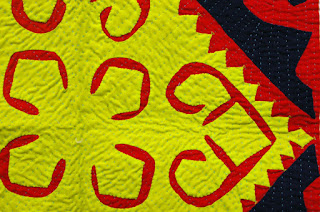 The quilt is entirely made by hand- as far as I can tell, using reverse applique and no or a very thin batt.  As for where it comes from,I'll just quote the information I received with the quilt:


The amazing story of Lila Handicrafts began perhaps thousands of years ago when women in the desert area of Pakistan started making beautiful textiles and quilts.  Patterns and colors in the cotton were passed down from mother to daughter produced time honored practical and beautiful quilts called rallis.

In 2004, men and women in the small village of Tehsil Diploh, Sindh in the far southern part of the Thar Desert formed a cooperative to make and sell their rallis.  They are from the Hindu untouchable group  and had very few opportunities to make money in a rural area.  Through the internet, they reached Patricia Stoddard who had written the first book about rallis.  The rallis from Lila Handicrafts were first sold at the Santa Fe International Folk Art Market in 2006.  Since then, they have been sold every year.  They were even featured in "O" Magazine in 2010!

Originally, the money from the rallis was used to provide a primary school for their children.  In August 2011, a terrible flood hit the entire region affecting about 6 million people.  Selling their Lila rallis provided the families with some funds to rebuild their lives and continue in their good efforts.  Special thanks to SHINEhumanity.org for their help in sustaining and rebuilding the community!  For more information see www.ralliquilt.com or www.ralliquilt.com.uk.

I love being able to buy a beautiful piece of fiber art, and helping a community in a poor part of the globe at the same time.  Once I get a sleeve sewn on the back, it will be a wonderful shot of color in my home- and a reminder of how women throughout the world find both joy in creating beauty with fabric, needle and thread.

I'm linking this post up with Nina Marie's Off the Wall Fridays.  Go look at all the other creative spirits linked up there!

Beverly
Spanish Fork, Utah, United States
I've had a needle in my hand as long as I can remember. After thinking for years that my brother got all the artistic genes in our family, I'm discovering the joys of creating my own fabric with dyes, paints, and about anything else one can use to color on fabric. My fiber art truly is the therapy that sees me though my day job as a clinical social worker.

Fiberart for a Cause