pretty much describes my daily quest, trying to balance the 'have-to's' with the 'want-to's.'  Balance is also the theme of our next Tangled Textiles challenge.  I found a couple of hours to start playing with it this weekend, and this is what I came up with. 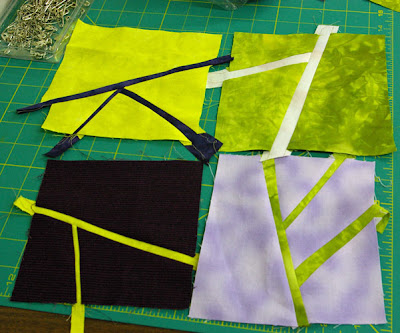 I'm limiting myself to two colors, in a range of values.  I don't know if any of these will end up in the final piece, but I am having fun playing.  We'll see where this leads me.
Today was all about the kitchen.  I made chicken white chili for dinner.  I've done it before, but I think the pot I made today- without a recipe- is the best I've ever done.  This is what was left in the pot after dinner. 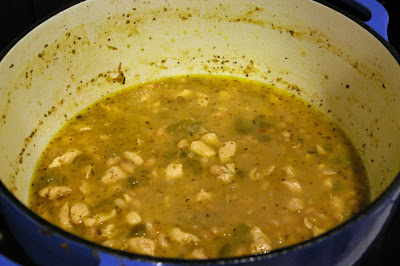 So, for my own sanity, since I probably won't remember how I did it if I don't write it down NOW- here's my recipe.  I chopped a large onion and about four cloves of garlic, and sliced about six stalks of celery.  I sauteed these in olive oil- enough to coat the bottom of my Dutch oven- until tender.  I covered the pot and let them sweat on low heat while I cut up four large chicken breast halves in to small pieces.  I took the veggies out of the pan, and sauteed the chicken in three batches, so the pan wasn't too crowded.  When all the chicken was cooked, I added my spices.  I used about two teaspoons of roasted ground coriander, two teaspoons of ground cumin, and two teaspoons of oregano.  I added salt and pepper, and cooked the chicken and spices for a few minutes.  Then I returned the veggies to the pan, added four cans of drained canellini beans, two small cans of chopped green chiles, and three cans of chicken broth.  That filled my Dutch oven up to the top.  I let it simmer for a couple of hours this afternoon, then served it with grated queso fresco, sour cream, and cilantro.  With corn muffins or tortillas, it made a scrumptious winter dinner.
I've had cans of pumpking staring at me in the pantry from Christmas- I never did make a pumpkin pie this year.  So I made pumpkin gingerbread cupcakes, frosted with cream cheese frosting.  Love the recipes in Williams-Sonoma Cooking at Home.  The frosting recipes don't have tons of sugar in them, and aren't gagglingly sweet.  Yum!! 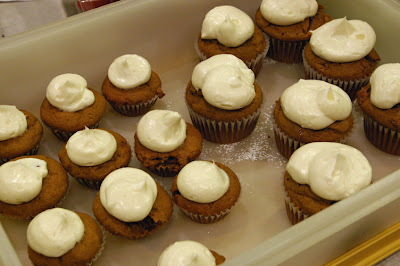 I swear, one day I'll be a pro with my pastry bag!
So now I'm off to try to finish my latest book in my Nook- I need to start reading a library book I downloaded, I only have two weeks to get through that one.  Hope your week is a flavorful and creative one!
Posted by Beverly at 7:16 PM 4 comments:

That's all I have to offer up tonight, without any visuals.  I haven't taken any interesting photos recently, and I certainly don't need to bore you with photos of the snow we got over the weekend and today.  No, Shiloh and I did not go walking in it this weekend.  Since I worked on Friday, I felt rushed all weekend.  Amazing how I've gotten into a three day weekend grove, I need that long to get all my domestic stuff done, and get some creative time in the studio.  There was no creative time in the studio this weekend.
We have a new challenge for the Tangled Textiles group- Balance.  I quite like this one, and have been mulling ideas around in my head.  I think I will take some time to observe my surroundings, and get some photos of both balance and imbalance.  Beyond that, I'm not sure what direction I will take.
I thought I would be taking two workshops this year.  Rosalie Dace is teaching in Grand Junction in June, and I'd thought I could swing it.  Last week I came to the conclusion I couldn't, and took my name off the list.  Carol Soderlund was supposed to come back to Heber in July, but the studio we used for her workshop last summer is not available the week she can come- so that one has been put off until 2013.  Katie PM is coming here in August, and I just can't get enthusiastic about taking a class from her.  I'm getting more and more tired of taking design related classes from quilt artists.  I'm really thinking I just need to find the time and motivation to stay home and do the work.  So maybe the time I would have been at Carol's workshop will be staycation in the studio.  Or maybe I will take a long weekend and spend time with my brother and camera somewhere around Reno.  My brother would be the perfect companion for that kind of getaway.  Lots to think about, at least I don't have to make a decision any time soon.
So there you have it, the boring state of my mind.  I'll let you know if any of it results in action any time soon!
Posted by Beverly at 8:05 PM 1 comment:

We had our first snow of the year today- and I decided that my foot was feeling good enough to go for a walk with Shiloh.  I haven't been walking in a couple of months because of a plantar wart on my right foot.  I had it taken off last fall, but it came back- even worse.  My podiatrist took it off again a couple of weeks ago- it has taken that long for me to feel like I could walk, not limp.
So Shiloh and I drove up to Hobble Creek, where I'd learned there is a paved trail.  We found it easily, and headed off.  It was starting to snow, but not enough to make me change my mind.  I also wanted to take some pictures with my Nikon point and shoot.  I'm trying to use it and get used to the settings and it's capabilities.  It will never replace my Pentax DSLR, but I love having a camera that fits easily in my purse or pocket.
We had to cross a couple of bridges.  Shiloh managed to stand still long enough to have a portrait! 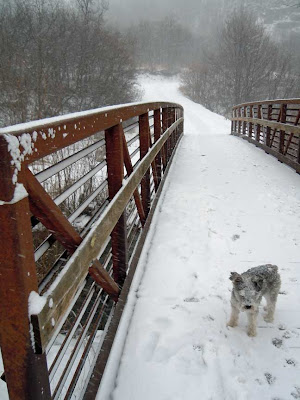 I loved the texture and color of the lichen on this tree trunk. 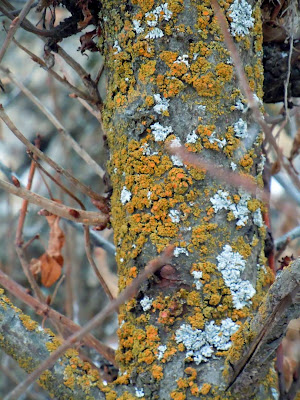 I wasn't expecting to see any green leaves this time of year- but these were peeking through the snow and underbrush. 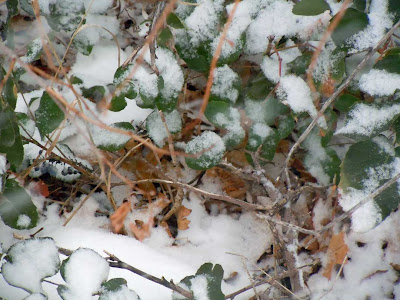 It may have been snowing, but Hobble Creek was running fast and furious.  I was intrigued by the movement of the water next to the one piece of ice. 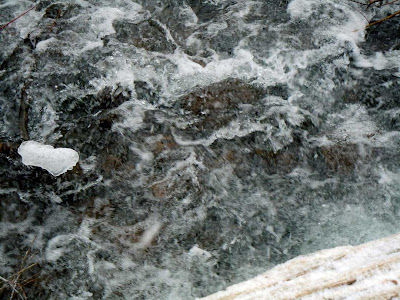 We walked for about an hour- I think we did about three miles.  When the snow on the trail got thick enough that I couldn't tell where it was icy underneath, we turned around.  But it's a trail I'll be going back to when the weather improves!
Posted by Beverly at 7:38 PM 3 comments:

Today was the reveal for the fourth Tangled Textiles challenge- "Look Up."  My entry is The Eyes (don't have it anymore).  I was trying to use my recent experience with a secondary cataract and subsequent laser treatment as my inspiration. 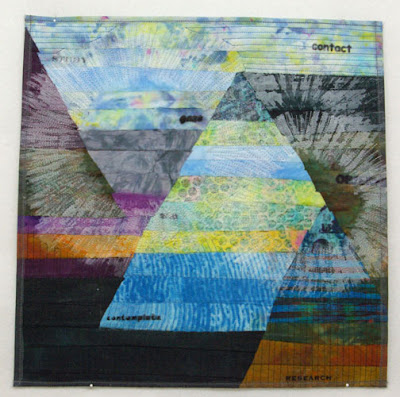 It is another mixed media piece, using the same general techniques as 'The Tools of My Trade" that I did for the last challenge.  This one has a lot less paint on it, and I am not that happy with it.  It never felt like it came together.  Maybe it will look differently to me if I put it away for awhile, but right now I am ready to move on to something else.
I tried and successfully used some new techniques- blurring text with PSE, and transferring a laser print of the text with gel medium.
Click on over to the Tangled Textiles blog and see what the others in the group did.  There are some incredibly imaginative interpretations of the theme, and some wonderful work.
Posted by Beverly at 7:36 PM 2 comments:

I got some work done on my Tangled Textiles challenge piece, which needs to be done by the 15th.  I will be pushing that deadline!
I'm doing mixed media again, and have a base layer similar to the last one I did.  Right now I'm waiting for some gel medium to dry that I used to do transfers using a method I've never done before.  Yes, I know I'm breaking a cardinal rule, but I don't have time to do samples.  I'm just praying it doesn't come back to bite me on the butt.
Here's your teaser, one corner of the piece.  I haven't even started with the paint, so I suspect that it won't look like this very long. 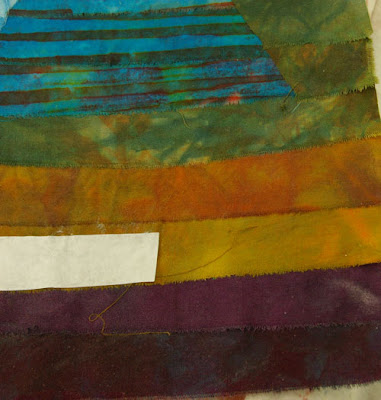 That white rectangle is not fabric, it's my transfer mid-process.
I also added to my library this week- and I am very happy with one acquisition! 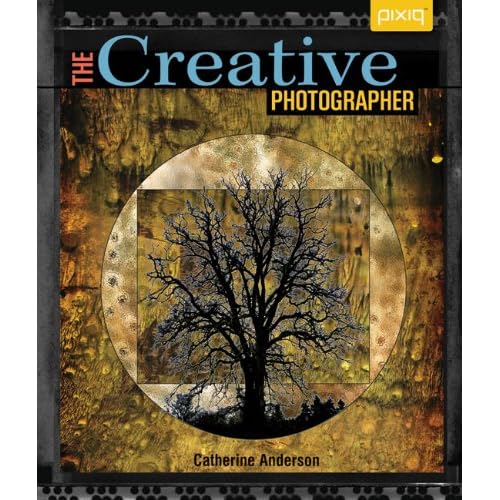 I haven't even read the entire book, but she has some exercises using your camera that I am excited to try.  She does have information about camera settings and other technical information, but mostly this is a book about using the camera as an artistic tool.  I knew I was reading a kindred spirit- she talks at the beginning of the book about needing to spend at least some time after work (as an attorney) each day with her fabric and sewing machine.  She has some interesting ideas for using your own photographs in different kind of art projects, many of which are easily translated to fabric.  For anyone who wants to be more creative with the camera, I would highly recommend this book!

We got our first snow in quite awhile yesterday.  I must admit I have thoroughly enjoyed the lack of snow and the mild winter temperatures we've been having.  I just hope we don't get buried in the valley the rest of the winter- it can snow all it wants in the mountains!
That's it, I'm off to see how dry my gel medium is.  Here's hoping your week is a good and creative one!
Posted by Beverly at 6:50 PM 7 comments:

Beverly
Spanish Fork, Utah, United States
I've had a needle in my hand as long as I can remember. After thinking for years that my brother got all the artistic genes in our family, I'm discovering the joys of creating my own fabric with dyes, paints, and about anything else one can use to color on fabric. My fiber art truly is the therapy that sees me though my day job as a clinical social worker.

Fiberart for a Cause